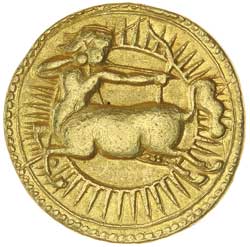 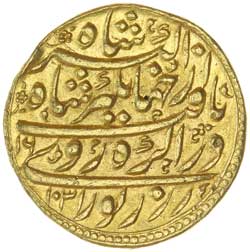 Ex Taraprewalla Collection of the 1920s, who was the accountant of the Nizam of Hyderabad, given by his grand-nephew to the current owner about 1990.

R.B.Whitehead examined and published in the 1931 Numismatic Chronicle (p.91-130), all known examples of the zodiacal coinage and he noted 7 known examples (p.123) of this type and date.

Jahangir (1605-1628), Akbar's son and immediate successor, used the Ilahi Era to great artistic effect by issuing two series of mohurs that incorporated Ilahi Era elements. The earliest series, known as the portrait series, since the coins show the emperor on the obverse, all show the constellation Leo superimposed over the sun - a reference to Jahangir's birth in August. This series was struck within a three-year span early in Jahangir's reign and are quite rare. The second series, known as the zodiac series, since each of the twelve constellations of the Zodiac is represented on the reverse, was a much larger series. Struck both in gold and silver, the zodiac series was issued from several mints (with Agra being the primary), and were minted over seven (or) eight years. Since the Ilahi months were solar months and corresponded with the solar ecliptic (an imaginary line in the sky that marks the annual path of the sun), each month was represented by an appropriate sign of the Zodiac, recording its particular month of issue.

The Sagittarius is known from 1029/14 to 1034/20m, about seven years. As per Tuzuk-e-Jahangiri, it occurred to the Emperor in the 13th regnal year that, "At this time it entered my mind that in place of month they should substitute a figure of constellation which belongs to the month. For instance in the month of farwardin, the figure of a RAM and urdbihist the figure of a BULL. Similarly in each month a coin was struck the figure of a constellation was to be one face as if the sun was emerging from it. The usage is my own and had never been practiced until now" - with acknowledgement of thanks to Prashant Kulkarni.

Because many of these coins had been recalled and melted by Jahangir's successor, Shah Jahan, original strikes are very rare. Collector restrikes were periodically issued over the following century, and though they are more often encountered than the originals, are relatively rare themselves.

Find upcoming auction information, access our most recent catalogue and explore one of the world's largest auction archives of 370,000+ lots.