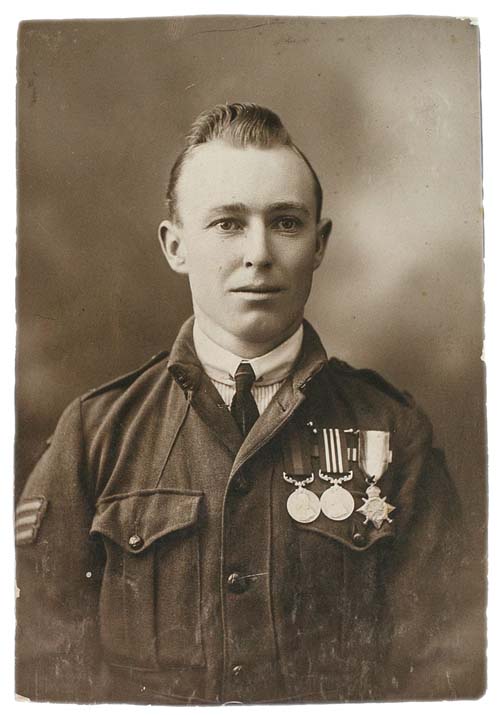 Recommendation: At Westhoek on the night 17th/18th Sept., 1917. For courage and determination as a Patrol leader. He was in charge of a reconnoitring patrol of 5 men sent out to ascertain the dispositions of enemy posts in front of the line selected for jumping off and brought back valuable information. While in No Man's Land, he was attacked by a strong enemy patrol. By prompt and vigorous action he inflicted sufficient casualties to force them to withdraw, and succeeded in cutting off one German who was later made prisoner by our nearest post. The information resulting from this and other patrols led by Sgt. Day proved of great value in locating definitely the position of enemy posts prior to the attack of 20.9.17

Recommendation: For most conspicuous gallantry and devotion to duty during the attack near Beaurevoir, East of Peronne, on 4th Oct., 1918. This N.C.O. was in charge of a platoon in the leading wave, and showed remarkable coolness and dash as he led his men through heavy direct machine gun fire. When a large gap was caused through casualties he reorganised the nearest sections and restored the line. On arrival at the objectives he headed the mopping-up parties and bayoneted three of the enemy who refused to surrender. He then collected a small party and pushed out in front, covering the digging of our new posts, and causing the enemy severe losses by skilfully controlling the fire of his men. Throughout he proved himself a gallant and dashing leader and displayed the greatest daring and resource.

Recommendation (9/9/1917 but no indication for what award but probably MID): For consistent good work and devotion to duty. This N.C.O. has carried out his work in dangerous positions, with cheerfulness and courage on all occasions. Preparatory to the attack on the Hindenburg Line at Bullecourt on 3rd May 1917, he led a daylight patrol over No Man's Land for purposes of reconnaissance, under circumstances of considerable danger. At all times he has set a fine example to his comrades.

With research including copy of Service File.