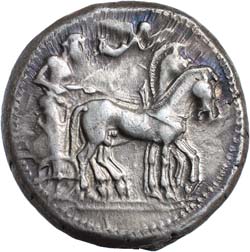 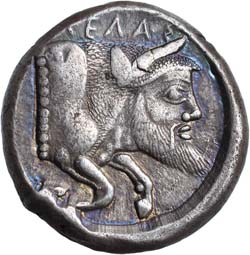 Ex CNG Auction 96, lot 9, with ticket. Previously Comery Collection, Roma VI, lot 373.
Per CNG: "Situated on the southern coast of Sicily, Gela was founded in 688 BC by Cretans and Rhodians. It rose to become, by the turn of the 5th century BC, the most influential state on the island. In 485 BC, its ruler, Gelon, seized Syracuse and transferred his capital there, taking with him many of the leading citizens of the city. His brother Hieron, later tyrant Hieron I of Syracuse, was left in charge of Gela. Tetradrachms began to be struck at Gela circa 480/75 BC, shortly thereafter becoming the principal denomination of its coinage, and remaining so down to the time of the destruction of the city by Carthaginian invaders in 405 BC. The ultimate design of the tetradrachms displayed a racing chariot, borrowed from the Syracusan coinage, and the forepart of a man-headed bull. The rather brutal half-length figure of the man-headed bull swimming right is based on the "father of all rivers," Achelous, and is clearly identified by the ethnic Gelas as the personification of the river Gelas rushing to its mouth, where the city Gela stood. It was defined by Virgil (Aen. 3, 702) as "immanisque Gela fluvii cognomine dicta" (and Gela called by the nickname of its monstrous stream)."