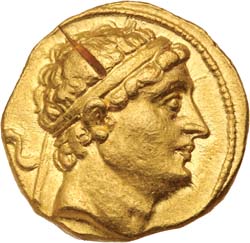 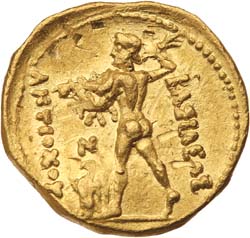 Ex Baldwin's Auctions, London, Sale 31, October 10, 2002 (lot 62).
One of the rarer and earlier issues of Baktria, described by Bopearachchi as a unique commemorative coin (SNG ANS 9 page opposite plate 5). More coins were found in the late 20th century in a hoard. The type was struck in the name of Antiochos II but with the portrait depicting the physiognomy of Diodotos and his reverse type (Zeus striding to left) shows that it is Antiochos II who is commemorated and not Seleucos II and consequently provides the view that it was under Antiochos II that Baktria became an independent kingdom. This means that it was towards the middle of the third century B.C. (c.250 B.C.) that Diodotos, the satrap of Baktria and Sogdiana revolted against his Seleucid master and proclaimed himself king. Thus was born the Graeco-Baktrian kingdom.