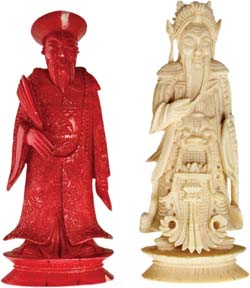 CHINA, Canton, late 19th century, export ivory chess set, the kings and queens modelled as Emperors and Empresses, the bishops as dignitaries, the knights on horse back, the rooks as elephants with turrets and flags, the pawns as foot soldiers, the king 100mm high, the pawns 50mm high, 16 red pieces and 16 white pieces. Minor damage, otherwise very fine and rare as a set. (32)